Lakshmi on the BBC

This is a comment on the BBC In Our Time programme, on Lakshmi, hosted by Lord Melvin Bragg broadcast on BBC Radio 4 on 6 October 2016. Without making any statement about the sincerity of the presenter or those academics (Jessica Frazier, University of Kent; Jacqueline Suthren Hirst, University of Manchester; Chakravarthi Ram-Prasad, Lancaster University) who participated in it, th 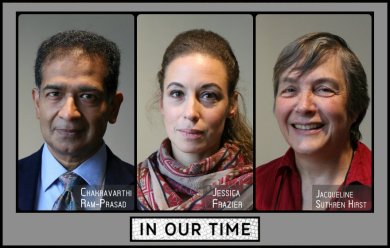 e programme brought to the fore, albeit in a half hidden way, the contemporary dilemmas facing anyone who wants to talk coherently about any aspect of the Indian traditions.

The discussion actually demonstrates our inability to talk about Indian traditions without reducing them to some cheap, better-disposed-of copy of Christianity. The programme achieves this for the figure of Lakshmi, a result no doubt totally unintended by the BBC, the host or his academic guests. What follows is a short description by a hearer that is inevitably a synthesis of the discussion as heard rather than a comment on one or another participant in the programme. In other words, for the following description to make any sense, we have to pretend that, much like a novel, a narrator is speaking through the mouths of each participant.

From the start of the programme two themes introduced testify to the fact that the questions asked have no bearing on an understanding of the goddess Lakshmi or, for that matter, any aspect of the Indian traditions. There is talk about origins. Such talk is intelligible only because of the dominant cultural context in which the question of origins of religions, as belief systems, is normal and normative. Without a historical origin there cannot be a foundation to a belief system. But the search for foundations is neither here nor there for Indians who never asked questions about foundations until the dominant Semitic theology imposed the necessity of establishing them.

Notice also how the text and its dating is treated. Religion must ideally be accompanied by text. Without text there is, after all, no foundation for beliefs. This ties in with the certitude provided by the Christian religion – a certitude that has since permeated the Western culture – that human beings are intentional creatures whose actions betray their beliefs, while beliefs found actions. Where better to examine t

he source of those beliefs than the available texts. The Semitic template is firmly in place.

However, it is made into an oddity that the Vedic texts do not speak of Lakshmi until some uncertain but certainly later date. The subtle suggestion here is that there is the hand of human invention, a suggestion which is less subtly and intermittently reinforced through the programme. In Semitic religions, which are of course God-given, there is no question of human invention, to suggest which would be blasphemous.

But Lakshmi can be treated as if invented, perhaps by defrauding priests, a human creation to be worshipped within a false religion. To Indians, it is of no importance whether Lakshmi is invented by a rishi or other personage. This is inconsequential to the role her presence performs in the Indian culture. So, on the one hand, the cultural intuition of Indians can sit relatively undisturbed alongside the allegation that she is an invented creature. On the other hand, the insinuation, to which most Indians are totally blind, is that whereas Indians believe in make believe, willing fools to believe in man-made goddesses, followers of Semitic religions have real religion sent to them by God, of which the religion is itself proof.

The making of Lakshmi is therefore yet another vain attempt by the Indian who contended the forces of nature and invented albeit rather elaborate, decorative and entertaining myths for his being able to cope with them. After all, as programme host Lord Melvin Bragg has it, “these are people like us [but] without the tools of knowledge”. There was no option for Indians other than taking refuge in make believe stories because they did not have real science, and no conception of real (rational) knowledge, as we do. One may even accept that for natural science to flower did indeed require religion, of which the Semitic religions are the epitome. One can even accept that wondrous achievements have been the outcome of the natural sciences. But in the programme the implication is to reduce the Indian to the imbecilic status of automaton who blindly believes in stories that are make-believe to somehow help him (or her – housewives appear to populate the programme) cope with life.

Christian themes loom large throughout the programme. So Indians “worship” and “pray”, but they do so transactionally ergo insincerely, thus unable to fulfil the demand of true Christian worship. The repeated citing of the importance Indian merchant communities give to Lakshmi not only underpins this suggestion but is in stark contrast to Jesus’ forbidding of his Father’s house being made into a house of trade. Christians themes continue to dominate: Indians have “theologies” that carry some “authority”, and they too have “God”; but they also have gods and goddesses and so are “polytheistic” in contrast to our monotheism; worship to Lakshmi is a “meaning making” activity.

Like so much else in the programme these themes also suggest that ‘Hinduism’, itself a unit of the European experience of India, is an erring variant of Christianity. This heritage is an old one, going back to the earliest encounters of Europeans with India. Its continuity and stability is even more remarkable. Once couched in explicitly religious terms, the durability of descriptive terms reveals much more: that the structures on which ‘secular’ depictions of the Indian traditions depend are themselves Christian and theological.

While this is the filter through which discussion of the Indian traditions still takes place, we undoubtedly get variation in accounts among the interlocutors, giving the superficial impression of genuine difference of academic opinion on the role of Lakshmi in India. Instead, what we have is each scholar going about her or his business talking of Lakshmi according to whatever pet theory takes their fancy. So it could be some version of feminism according to which Lakshmi comes to play a role model and support for women (only women? really?). It may be that through Lakshmi we learn of the development of social structure and specialisation in economic production among Indians. And so on.

What is certain is that the discussants are not working with any real theory of the Indian traditions that provides genuine insights into the Indian traditions and the role Lakshmi plays within them. Lacking such a theory, it is a market in which buyers and sellers may meet, each offering what sells or going for what they hanker. But is anyone really any the wiser after listening to this programme?

The writer is a Reader in Culture and Law at Queen Mary, University of London

This entry was posted in Uncategorized. Bookmark the permalink.

3 Responses to Lakshmi on the BBC